Showing posts from July, 2019
Show all

The last of the oysters 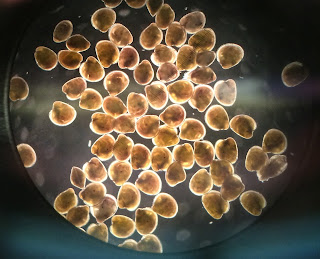 It is always satisfying when I get to see my scientific findings in print, and today is one of those days. The last of the papers I wrote about oyster larvae swimming behavior as a post-doc has been published in Marine Ecology Progress Series . The paper reflects a group effort that I only came into towards the end. The study was designed by my postdoc advisor, Lauren Mullineaux , and her collaborators, and the data were collected by two different summer interns. I helped out with the second run of the experiment , including picking up oyster larvae from a hatchery  and observing their swimming behavior, and then I was tasked with analyzing the data. Oyster larvae, photographed at 10x magnification under a dissecting microscope. Photo by Erin Houlihan. Our findings are pretty cool. We exposed larvae to filtered seawater (as a control) and a chemical settlement cue from adult oysters at both ambient pH and a lower pH level predicted for the surface ocean in 2100. (If you don't
Post a Comment
Read more

The Palmer and Crary 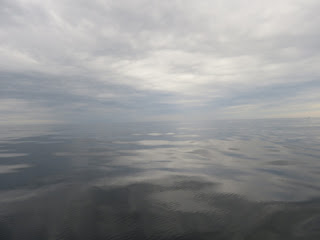 The sea was so flat, I could barely find the horizon We left Gloucester before dawn. As the eastern sky grew pink, we steamed out of the harbor on a glassy sea. The weather was perfect; the ROV was working; it seemed fate was on our side. Last week, my team was back in Stellwagen Bank National Marine Sanctuary to sample a new shipwreck. We had worked out many of the kinks in our sampling strategy and were rewarded with two amazingly productive days. Altogether, we collected 10 glorious hours of ROV video footage and covered almost the entire wreck. Watching the ROV video feed with Calvin, the project's archaeologist. My face says it all. Photo credit: Elizabeth Weinberg/NOAA. Our target this time was actually two ships, the Palmer and the Crary . They're both coal schooners - some of the largest schooners in history, actually, with 4 or 5 masts each - and they sank together in 1902. The ships were racing into Boston harbor during a very cold winter, hoping to arr
Post a Comment
Read more

- July 12, 2019
My shipwreck project has a strong media component in addition to the science. In September, we will be back at the Portland wreck site and broadcast live from the ship using telepresence. The broadcasts will allow schools, museums, and the general public to join in the expedition and study the Portland for themselves. This week, we did one broadcast from the dock in Gloucester, which was live on the NOAA Office of National Marine Sanctuaries' Facebook page. I apologize for not posting the link here in time for readers to join in, but the video was recorded and can be found at this link  or embedded below. I also highly encourage you, friends, to follow the NOAA Office of National Marine Sanctuaries Facebook page ( find it here ) because that is where telepresence broadcasts for the general public will appear in September. We'll be at sea September 16 - 19 with telepresence, so stay tuned!
Post a Comment
Read more 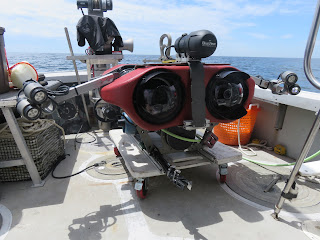 Friends, I am back out at sea on the Dawn Treader to study shipwrecks in Stellwagen Bank National Marine Sanctuary! My team set aside this week for ROV dives on the wreck of the steamship Portland , sunk in 1898. It took us a while to figure out the best way to work in our study area, but we eventually smoothed out all the kinks and collected 8 hours of good footage. It was so rewarding to see the wreck! ROV Pixel on board the Dawn Treader Working in Stellwagen Bank National Marine Sanctuary is actually pretty challenging. At 450 ft (137 m) deep and ~30 nautical miles from shore, the Portland is in a weird middle ground. It's too deep for SCUBA diving but not far enough offshore to justify the use of a large regional- or ocean-class research vessel. It's not a shallow coastal habitat, but it's also not quite deep-sea either. We're filling in the gap with day-trips on a small (30 ft/9 m) boat and a small ROV, but we've had to contend with some logistical dif
Post a Comment
Read more
More posts