Showing posts from August, 2015
Show all

Another way you can die 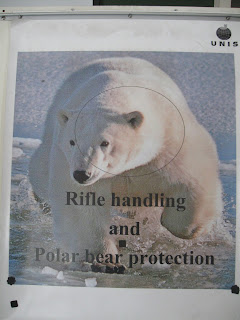 "And so you find yourself embracing the ground And your foe is as near as the silence you hear As [you] stop to load another round Battles raging, it's all staging, 'till you realize Another way you can die" - "Another way you can die" by Trans-Siberian Orchestra I'm all settled in to Svalbard by now, and today was the first day I had a schedule. I'm going to be here for 6 weeks this time - the longest I've ever spent on Svalbard - and I'm officially registered for a class, so my days are much more structured than before. I'm taking the class essentially because in order to finish my experiment, I have to be on the class research cruise, and to be on the cruise, I have to take the class. It makes sense to take the class anyway, because it's taught by Paul Renaud, one of my advisers for the settlement plate project, and also because the topic is Ecology of Arctic Marine Benthos, which, after all, is kind of my thing. My day be
Post a Comment
Read more 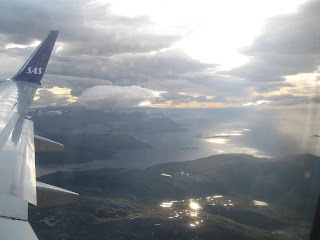 So after a week at my parents’, I returned to Oregon for exactly two and a half days. I unpacked, re-packed, cleaned my apartment, examined some specimens, took care of some paperwork, met with my labmate, made a poster, and generally ran around like a maniac. Totally normal. Landing in Troms ø Then I hopped on a plane, and I have essentially been on one ever since. I flew to San Francisco, then Frankfurt, then Oslo, then Tromsø. I think it’s poetic that every time I fly to Norway, I have to go through Germany, because it ties together my European experiences so well . In fact, my incredibly long route so far hasn’t seemed as strenuous as it probably should, and I think that’s because it’s all been through familiar territory. Germany and Norway both feel like home to me, and northern Europe is well-covered in my footprints. Right now, I’m in Tromsø, Norway, where I have about an 18-hour reprieve between flights. No, that does not mean I’m stuck in an airport, thank goodnes
Post a Comment
Read more 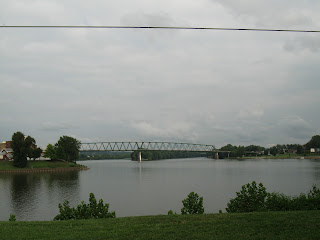 Dear friends, I apologize for my silence over the past two weeks; I guess I didn't realize how long it had been since I last posted. I suppose I should catch you up. Last week, I took some time out to visit my family. My parents moved to a new state about a year ago, and until last week, I had still never seen their new house. My mom invited me, and we strategically picked a week when my brother would also be in town so the four of us could all spend time together. It was a really great chance to see where my parents have settled, catch up on all that's happened recently, and hang out with my brother. One of many bridges over the Ohio River. The land on the left is Ohio; on the right is West Virginia. My parents' new home is on the Ohio River, on the border between Ohio and West Virginia. They live in a small industrial town, which actually in some ways reminded me of Coos Bay. The difference is that wherever you look in my parents' town, there is a strong sens
Post a Comment
Read more

The mythical state of Jefferson

- August 14, 2015
When I first moved to Coos Bay, Oregon in 2012, I was told by some that I had not in fact moved to Oregon. I had moved to Jefferson, they said. As you can imagine, I was utterly confused. Jefferson is a state that never was. It encompasses southern Oregon and northern California, and it's all but official - there's a state seal, a state flag, a state motto, everything. The Jefferson independence movement has happened in several waves, the strongest being in the late 1930s-early 1940s, but it was abruptly halted by U.S. involvement in WWII. Still, anyone driving south on Highway 5 can tell there's a difference between southern Oregon and the rest of the state. You cross an invisible line somewhere around Cottage Grove, and instead of bustling cities full of alternative, progressive yuppies, you find yourself in the middle of the woods. Jefferson is the land where small towns rule and backpacking is a way of life. Our local public radio station is actually named Jefferson
Post a Comment
Read more

Bring down the house 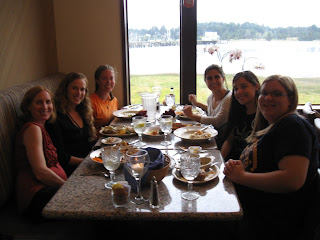 "Feel that rumbling sound I might have grown up in a barn But I can bring down the house" - "Bring down the house" by Dean Brody Before I left for my last cruise in the Atlantic, I already had it on my calendar to deliver a seminar about the cruise after I got back. Maya Watts, OIMB's summer term coordinator, knew that no matter what happened, we would have interesting stories from the ship and got us on the books before the cruise even happened.  And it's a good thing she did! Obviously, there were a lot of interesting things happening on board Atlantis , and it was fun to present these tales to the rest of the OIMBers. A group of five of us made the presentation, because two were unavailable. We divided and conquered, each person covering a specific topic that pertained to their research, then finished the seminar with a section about life at sea and diving in Alvin.   The best part for me was actually the question-and-answer session aft
Post a Comment
Read more 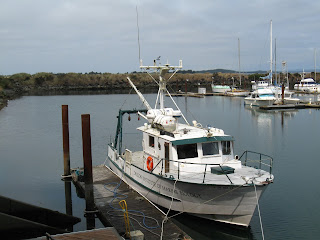 Squatting next to a cement block on the deck, Caitlin looked up at me with a goofy grin on her face. "Hey Kirstin!" she called, "I'm already bleeding in two places! That's how you know it's good field work!" I rolled my eyes. Yes, we give blood, sweat, and tears for our science, but I'm not sure that bleeding should ever be considered a good thing. I looked at Caitlin's hands, then examined my own. Both of us had countless little cuts and scrapes, the inevitable result of getting friendly with barnacles. Because today, we had lots of barnacles. R/V Pluteus at OIMB's dock We were offshore on OIMB's 42' research boat, R/V Pluteus, recovering the settlement plates I outplanted earlier this summer . The original plan was actually to go out every three weeks to recover the settlement plates, but that just didn't happen. I already told you how bad the weather was on deployment day, and it only got worse after that. Then the
Post a Comment
Read more 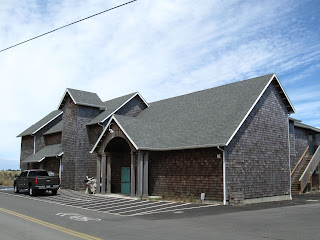 The Charleston Marine Life Center, just across the street from OIMB This weekend I got to do something a little different: I volunteered as a museum docent at the Charleston Marine Life Center, just across the street from OIMB. The CMLC has been under construction since I started at OIMB three years ago, and it's getting very close to being finished - close enough, anyway, that it was open over the weekend for a public preview. A lot of people were in town for the Seafood Festival, so it was the perfect time to open the museum, welcome the public inside, and give them a sneak peak at some of the exhibits. Specimens in the CMLC's marine mammal gallery The brain behind the CMLC is my Ph.D. adviser, Craig Young, who is also the director of OIMB. It's been neat for me as a member of his lab to see such an ambitious project come together. Craig has been planning, raising money, and managing construction efforts for the museum since long before I arrived in Oregon, beca
Post a Comment
Read more

- August 04, 2015
"[Frosted] trees and window panes Shimmering where tinsel hangs And the butter light of candlesticks Chases snowflakes off the bricks... Everything looks better in gold and green" - "Gold and Green" by Sugarland* For as long as I can remember, I've measured time in school years. My year starts in the fall and finishes at the end of the summer, making New Year's Day sometime in August. I can remember much more easily whether something happened in 10th grade or 11th grade than I can remember if it happened in 2007 or 2008. I use phrases like "My second year of undergrad" and "The year I lived in Germany" instead of 2010 or 2012.  I think I tell time this way for a few different reasons. First, I've spent my entire life as a student in the temperate latitudes of the northen hemisphere, so it makes sense that I've adopted a fall-to-summer schedule as my natural rhythm. Second, my birthday falls at the end of the summer, so
Post a Comment
Read more
More posts