Showing posts from August, 2021
Show all

- August 27, 2021
One of the things I'm working on right now is building a model of invertebrate life-histories with a WHOI postdoc, Silke. We had a jam session a couple weeks ago to map out the model . This week, we took the next step, which was turning variables into numbers. We're using the extremely well-studied species Crepidula fornicata as the base for our model. The convenient thing about Crepidula is that enough people have been studying it for enough time that we know exactly how fast it grows at different temperatures, how it responds to stress, how many babies a mother produces depending on how big she is, and even how environmental conditions in one stage carry over to affect the next stage.  Silke and I headed outside with our laptops and dug through paper after paper on Crepidula fornicata . Who was it that studied larval growth rates at different temperatures? Where was that figure with adult sizes and fecundities? Has anyone measured the growth rate for juveniles? These were t
Post a Comment
Read more 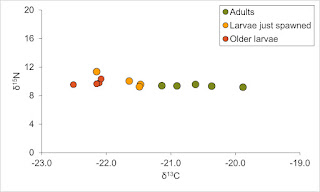 Most of the time, I refrain from sharing actual data on this blog. It's an unofficial, informal science communication tool, but still, I don't want to risk a scientific journal thinking I've already "published" my work by sharing it online. But I'm going to make an exception today because I want to show you something I'm working on. These data are not publishable by themselves, so I'm not risking any future misunderstanding with a journal. Getting to see the actual data and peek inside my head will help you understand how scientists interpret the world. And plus, the experiment is pretty cool.  Earlier this summer, I collected larvae at two sites around Woods Hole to see if I could tell what they're eating. I thought maybe the well-established technique of stable isotope analysis could help me differentiate larvae that were feeding (we call them "planktotrophic") versus larvae that are relying on yolk from their mothers (we call them &qu
Post a Comment
Read more 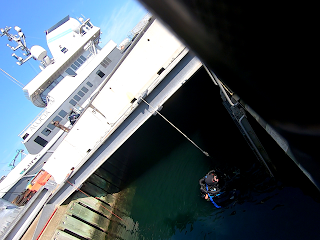 Problem: It's a hot summer day in Massachusetts, and sitting in an office just does not sound appealing. Solution (to this and pretty much every other problem): Go diving! The camera system CATAIN is in its last deployment deployment under the WHOI pier, and it was time to check on the system and clean it off. My grad student, Kharis, drove down and joined me for a dive under the WHOI pier. We learned a while ago that it's really helpful to take pictures of CATAIN's end-cap when it's underwater. That way, we can match up organisms we see from the bottom side in the images CATAIN records with their locations and appearance from the top - at an angle that's easier to identify.  It's summer now, so I was expecting a lot of settlement on CATAIN . There was definitely some, but not as much as I expected. It seems the settlement patterns are highly seasonal and vary by species. This time, most of the organisms on the end cap were small white tube worms called serpuli
Post a Comment
Read more 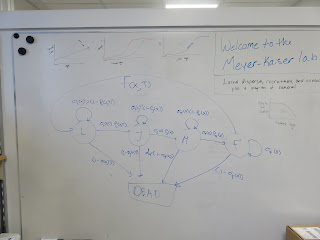 We stood in front of the white board, surrounded by boxes. Stacks of field gear purchased just prior to a global shut-down nearly filled that corner of my lab, but we had cleared it away to expose the erasable wall. A blue marker was in Silke's hand.  "So the probability of larval survival depends on..." she started. I filled in. "Size, because smaller ones are more likely to get eaten. But size depends on age and temperature."  "This graph?" Silke pointed to a series of linear curves I had drawn in the corner of the white board.  "Yes," I verified. She leaned forward and started drawing characters with her marker - mathematical expressions to represent the probability of a larva surviving from one day to the next. She looked up at me as she drew. I nodded, following her logic. We were making progress. I've been collaborating with a WHOI postdoc named Silke van Daalen to build a model of invertebrate life-histories. We started chatting c
Post a Comment
Read more 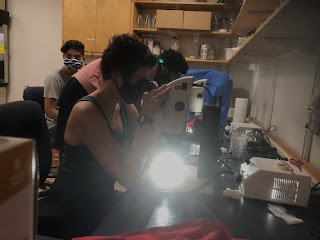 Larval Ecology Lab Meeting at the microscopes. The bright light is from one of the 'scope lights refracted through a dish of seawater.  There's a practice in academia that goes by a few names - journal club, lab meeting, or paper discussion. The basic concept is that a group of people who work on a similar topic get together once a week to read a published study in their field and talk about it. The group my lab participates in at WHOI is called Larval Ecology Lab Meeting. It's a great way to stay current on the literature, build relationships, and besides, it's quite fun.  This week, Larval Ecology Lab Meeting had a special twist. The summer interns were in town for the in-person portion of the program, so we capitalized on the opportunity and looked at a plankton sample together in the lab! There are just certain things you just cannot do with a large group over Zoom, and sorting tiny swimming animals from a dish of water under a microscope is definitely one of them.
Post a Comment
Read more
More posts