- August 17, 2022
A few weeks ago, I was invited by Admiral Tim Gallaudet to participate as a guest on The American Blue Economy Podcast, which he hosts. If you're not familiar with the concept of the Blue Economy, it refers collectively to activities in the ocean or other major bodies of water like the Great Lakes, which support economic growth, improve livelihoods, and sustain the health of aquatic ecosystems. Admiral Gallaudet has spent his career in the Blue Economy, first as Oceanographer of the Navy, then as acting director of the National Oceanic and Atmospheric Administration (NOAA). He regularly writes op-ed articles with well-informed and articulate positions on the importance of the ocean for the American economy and national defense. It was an incredible honor to be invited on his podcast, and now that the episode has been finalized, I'm excited to share it with you. 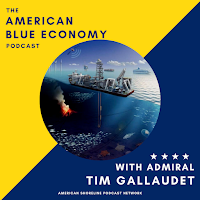 The episode I participated in was part of a sub-series called "Women Wavemakers," which highlights the role of women in the Blue Economy. Along with yours truly, the episode featured Mehgan Heaney-Grier, a champion freediver, explorer, educator and conservationist, and Stephanie Gandulla, a dive instructor, small business owner, and Resource Protection Coordinator for Thunder Bay National Marine Sanctuary. I was grateful for the chance to join in a conversation with these incredible women.
You can listen to our episode here. Enjoy!

Kirstin Meyer-Kaiser
I am Dr. Kirstin Meyer-Kaiser, a world-traveling marine biologist. Currently, I am an Assistant Scientist at Woods Hole Oceanographic Institution. I have lived in the United States, Germany, and Norway, traveled to numerous island nations, and set foot on every continent except Africa. I also occasionally participate in research expeditions at sea. My research spans polar, temperate, and tropical regions from the coastal ocean to the deep sea. This blog is about exploring the world and figuring out how it works. It is about the process of science, from identifying a question to publishing the answer. It is about the struggles, the victories, the cultures, and the people that I encounter along the way. I consider myself extremely fortunate that my work carries me across the globe and gives me the chance to explore. Feel free to ask me questions in the comments or just live vicariously.